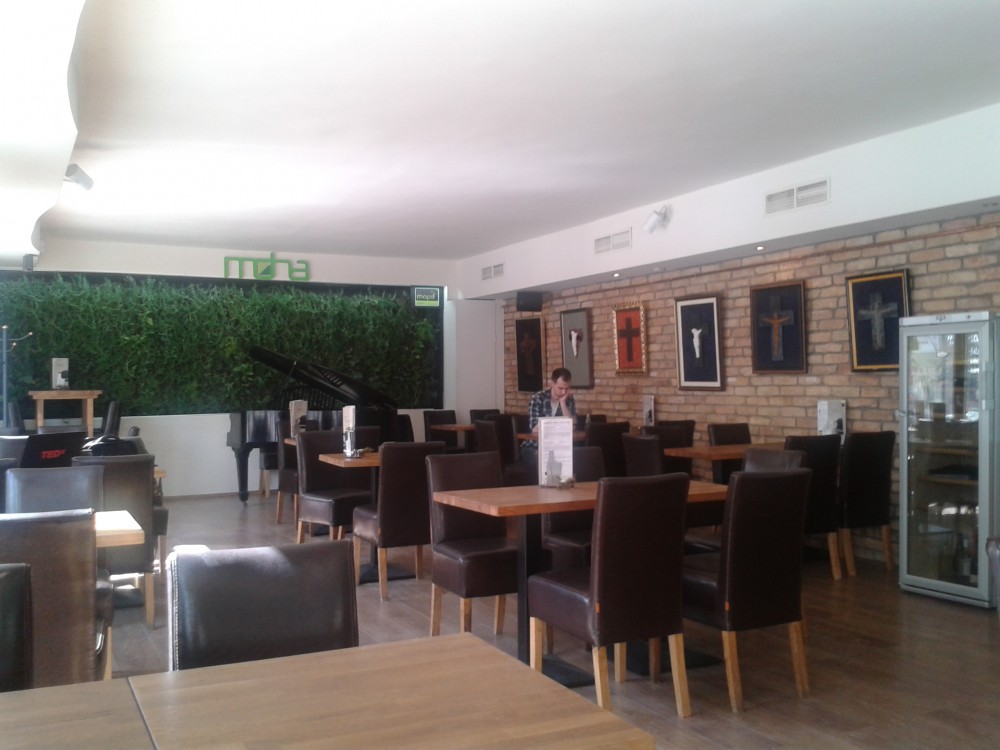 If you mention Móricz Zsigmond körtér it often evokes a feeling of nostalgia, and this for a place I have but a recent memory of. I’ve thought and taught here and drunk but a bit and yet I feel it’s somewhere I’ve been before, a place of greater memories, even if it isn’t.
There is a certain atmosphere in the area what with the tram rushing through as well as the 6 and 61 finishing up here. The schools, bookshops, fastfood places, all a step off make it a vibrant hub and now with development of the Metro 4 complete this area has come into its own. It owns the night scene Buda side, even if Lövõház is challenging to the north, and with the restaurants, bars, and general nuisances fanning out in all directions from the square, it’s certainly a pin to put in your google, or mental, map. Bartók Béla út, which dissects the square, is the main source of attraction and distraction with Szatyor, Nevada Pub*, Moha*, to name but a few offering up in terms of not only food and drink but other forms of spiritual nourishment. Nevada with its Cowboyish Wild West look, swinging doors to boot, has live music from the middle of the stairs on your way up: a live set-up in such a confined space?…interesting! (Sometimes a DJ may take over.) Booking a table is almost a prerequisite especially if you’re a group, or come looking for the perfect seat. The winter sees activities contained indoors while the sun shine draws forth a smattering of chairs making it a perfect beer and leer environment, even if your lungs and ears have to compete with the slight inconvenience of pollution from the ever busy Bártok Béla út…
Szatyor across the street has a sprawling ground floor with tables all ariot, while upstairs the seating is shared with a space for performances, exhibitions, and all the rest. As with Nevada it can get tricky to find seating around the weekend so be warned.
Whereas Nevada is a pub with grub on offer, Szatyor is a cafe with its own culinary aspirations. An offer of garlic soup followed by a Lángos was one of the lunchtime treats when I was visiting , and I tried it (poor students that afternoon), so while many may judge that as its downfall, it was most certainly for me its selling point. Like Nevada service in Szatyor never breeches the barrier between polite and friendly with smiles being somewhat a rare commodity.Maybe it’s the pressure, maybe it’s me, but especially in Szatyor’s case it seemed to be a little off-putting.
Another place worth mentioning is Moha which can be found farther down the street towards Gellért tér, and which is also inclined to entertainment beyond the food and drink on offer. As a place for breakfast it works, with ham and eggs amongst the choices, and there is an atmosphere which suggests something greater bubbling just beneath the surface. The grand piano in the corner may have something to do with it; my interest peaked. Of all the places I’ve mentioned it is the one place which I have not had the chance to sample evening time, so as to what to expect I can only fictionalise. A sign indicating a movie theatre hidden somewhere out of the morning’s grasp leads me to conclude that this place is aspiring to something bigger. As to whether it will achieve this, well, that remains to be seen, or will perhaps remain forever relative, because afterall, what is success? How can it be…blah blah blah.
That there are plenty more places to choose from goes without saying but to a man who has now got two children and too little time, such voyages of exploration are somewhat staggered, at least in comparison with what has gone before. These days memory must serve in place of accuracy, perhaps, and so I leave you to ponder and, if you wish, to contradict my words, for afterall, and in the end, there is no right nor wrong, just subjective truths:)

*UPDATE: Since writing this review I have been down that way again and found two changes, not to the locations but to the names.

and Moha is The Rabbit and the Duck bar, with a great logo to boot.

An English breakfast sounded tempting and at half the price of the expat pubs I wasn’t expecting miracles, though hoping nonetheless.
Up till that point Culinaris was a chance to buy good or “rarely found in Hungary” food at a price that would leave you feeling like after a date in prison.
My first encounter had been through winning a 10000huf prize in a sudoku competition, back when ten was still considered money, but recently I hadn’t dared. Imagine if I saw something at a price I couldn’t afford. Well I’d probably have found a pub nearby and drank my wishes away.
This time I was determined and yet not surprised when a very big plate, or very small portion, arrived.
A ramekin full of baked beans. Perhaps better than the alternative bed of beans that one gets back home, the other home.
A rasher in the full, not streaky, sense.
A fried egg ; and the pièce de résistance, the sausage. A skinny affair if all be told but definitely a tasty morsel, unlike another expat haunt I could mention where you’d be waiting for Godot for a decent breakfast sausage.
A few cuts off a baguette dropped almost haphazardly off to one side finished off the presentation.
What had I been expecting and yet getting two for a price still less than the expat pubs meant it was a comparably good deal, if boxing to that weight division. I wasn’t so it’s doubtful that I’ll be running back, but as the only Culinaris I know that offers the cafe to the side, it’s definitely somebody’s cup of tea. 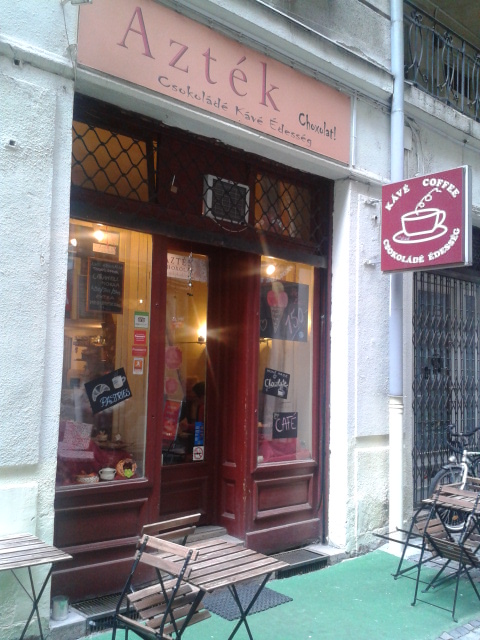 The fact that the Hungarian word for tomato and pardise (paradicsom) are the same could indicate a reverence paid by the Magyars to this simple fruit ( or is it a veg?). Nevertheless tomato isn’t something I’d usually associate with a chocolaterie and yet here I am, still uncertain.

Hidden away a little off the synagogue in a passageway between buildings, joining Károly körút with Semmelweiss utca, this place could easily be overlooked and yet the Tripadvisor has been and gone. It presents itself up front as all sweets and coffee: the glass casing at the counter filled with little treats and ice-cream scoops, while behind, the caffeine cardinals lie in wait. Along shelving scattered here and there, there are other curiosities, bottles of spices, bags of chocolate buttons, and other such marvels. It’s almost chemistry, even alchemy, and now as I sit here ruminating the paradicsomos csoki teaser I’ve just recently indulged in is resurrecting in the aftertaste whispering sweet nothings to my soul…a taste of more for sure, though I think I may resist in favour of sanity. Already the odd rush of a strong coffee coupled with the overtures of cocoa and tomato have me screaming of the tragedy of man.

A pleasant retreat it’s hard to imagine the bustling junction some twenty metres away and in the heart of the fifth district, come tourist time this little haven may indeed become one’s salvation in an escape from the heat and the hordes.