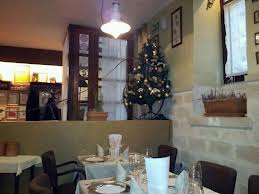 A lunchtime menu attracted me to this place seeing as its reputation precedes it in terms of price. And yes, while the main courses begin in the high 2000s and soar it’s the drink that’ll catch you. The only red in glass is a generous 650huf per “deci” (100ml/10cl) while the water is even pricier. Still, prepared for that, I wanted to enjoy this. Then what of it?

The place is pristine and service implied. The only fault early on was a horrible buzzing made by the air-conditioning. It was turned off on request, if somewhat reluctantly. Silver trays serve as place mats and the whole thing is too Upstairs-Downstairs (or Downton Abbey) for my liking. The cutlery is set up with the intention of being worked through, and the serviettes are folded and propped. Not a place I’d bring my daughter – the bull in the china shop image prevails, though the rebel heart would almost delight.

I imagine regaling her future husband with what may, or may not, be an embarrassing story. If she’s truly my daughter she wouldn’t bat an eyelid. Beneath her such finery would be, but not beneath me it would seem.

The waiter was a friendly chap, verging on a professional courtesy, but he engaged, held eye-contact, and played his part unobtrusively. He knew we were there for the menu!

Coming then to the food. On first impressions I saw only average – presentation aside – and in taste I felt that while competitive, it wasn’t high end as the prices would suggest. Okay so I had the menu of minestrone soup, a main course with pork, fried potatoes, and a ragu sauce, which could explain the simplicity, but my partner’s pasta, while certainly tasty, was only that. In fact it was the sauce that saved it. Maybe we were expecting too much, but it seemed overly simple considering the prices. That the ingredients are fresh is a given – this is the stronger selling point, I imagine, and on this note I’d have to conclude that overall it was worth the experience.

Nevertheless I do, with bias, think Andi could have made as good, if not a better, job at home. And perhaps this is not really a criticism as it is in Italian culture to love home-cooking anyway.

Finally, dessert was a caramel cream pudding with an alcohol twist. Tasty but the chocolate sauce was too buttery. Ahh, what the heck! A good destination for the menu but if intent on good Italian food in the city I suspect there could be better.