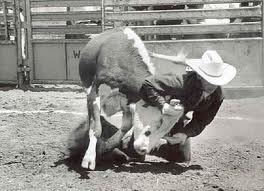 Made difficult if she decides she is not interested in cooperating. She’ll then employ all tactics necessary to fight the good fight which can be daunting if she is set down on her nappy-changer. The fall from there is about a metre to a tile floor. Worse still is if it’s a particularly messy present nappywise and she refuses to stay still. Altogether a tough discipline with points dropped for letting the baby fall, putting the nappy on backwards, or just getting all too messy. Drawbacks even if successful: A broken nose from a heel first, bruised body, or just ego. Other unpleasantness can be imagined.

A feat in itself this compromises  trying to pin her down while trying to prize one of her legs out from under her coiled up body, flicking her over and getting at least one into a pyjama leg. But even this is not enough because if the wait is too long she’ll have wriggled out again and scattered across the bed, giggles in her wake. While not as messy as the nappyising this has its challenges when it comes to all out physical endurance. Points dropped for putting legs in to arm parts of pyjamas, and vice versa; for making the baby cry!!!; for getting one or both legs in and losing them out again. A special penalty point is incurred if you have actually mistakenly put her pyjamas back on instead of her day clothes after changing her nappy in the morning.