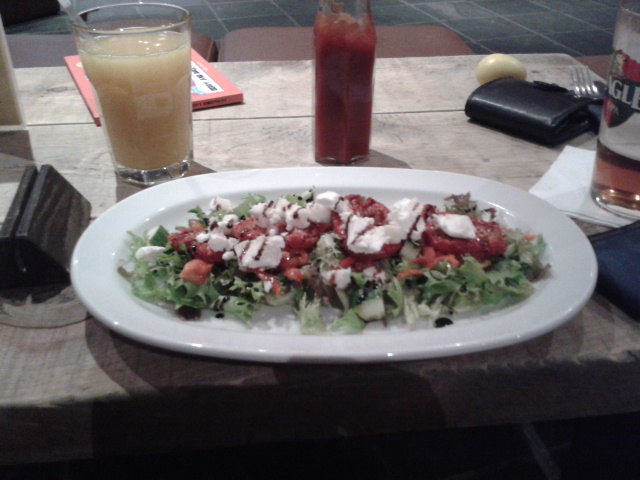 Down the steps running in off Trinity Street, Cambridge, lies The Vaults Bar and Restaurant. I was a little unnerved to begin with. Whereas cellar bars are a norm in Budapest, in England, much like Ireland, I imagine such places to revolve around pain, torture, or pehaps even deviant sexual pleasure. Being with Tara meant I wasn’t up for that sort of exploration.
As it offered a chef’s special, 2 courses for a tenner, I was game, and with Tara weighing in my arms I had grown disinterested in prowling for a better place.
A bar to the left, restaurant to the right, at the bottom of the stairs, I chose the former being as there were cosy chairs for my sleepy beauty.
Though she fought heroically in resisting fatigue it is only because she is sleeping now that I’m managing this.
Right. Starters were varied and I chose a potted crayfish with toasted bread. I say toasted bread rather than toast because the bread itself is worth a mention to the good. The crayfish, however, set in a ramikan much like a goose liver paté, fat congealed on top – the disappointment came in the heavy handed approach towards the pickle mixed in. This struck me as a dish made by someone who delighted in the idea of fish while not wholly liking the taste. A whiskey-coke drinker comes to mind.
The main was a goat cheese salad with strips of red peppers, sun-dried tomato, rocket salad and that curious brown sauce which is not quite YR nor chocolate but could pass for both at a distance. It won back points for both simplicity and taste. Goat cheese and sun-dried tommy-toes…the job!
Served on tap was a cider I didn’t try and a bitter, Eagle, which I did.
The service was professional, experienced, and within the realm of friendliness which, considering my initial douts/fears about the establishment down the steps, is a positive.
In summary, in the way of bar-restaurant tradition which has come to signify the turn of the new millenium, it slots in unobtrusively, but perhaps would never stand out, not in my own imagination at any rate*.
Whether or which, Tara is still out for the count and I’m considering another pint while feeling the pressure of a full bladder. But unlike the beer, Martin isn’t bitter!

← Inn for one or two
A Stout Performance →