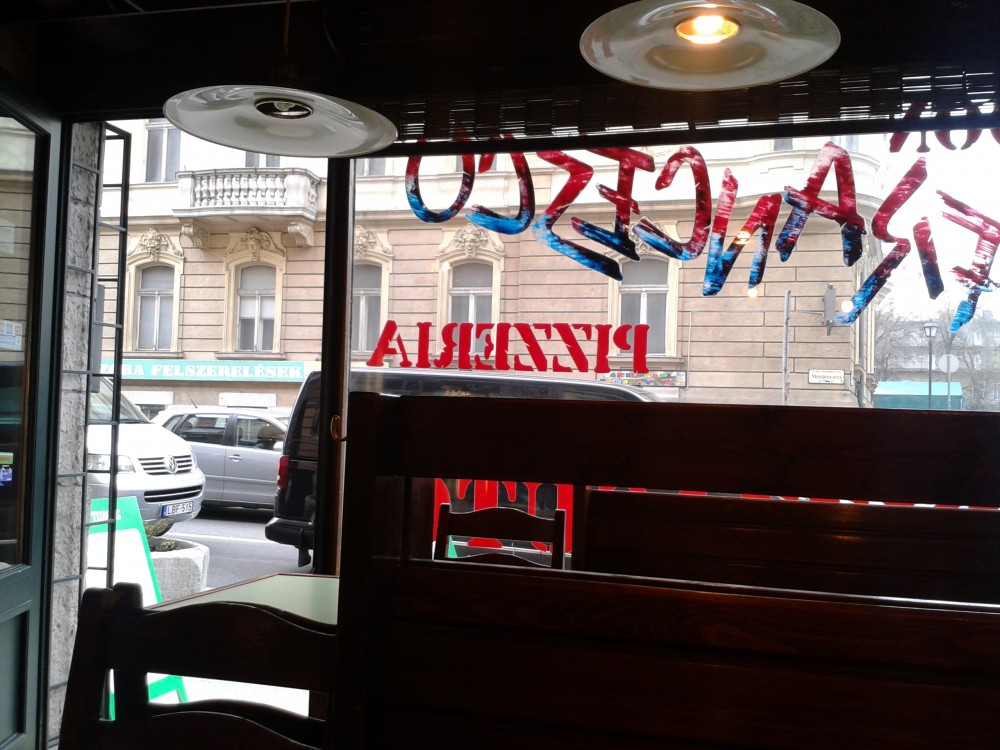 On Mészáros utca, in the 1st district, there lies a pizzeria of some renown, Don Francesco by name. and it was to this place I did find myself arriving having disembarked the 105 bus just outside its door, or as good as.

Of course, as is the order of my quest I went in search of the margherita pizza. Well, let me tell you it has a certain herbie good taste with slices of real(!) tomato adorning the top. It certainly had its appeal, but on an empty stomach much can be deceptive. In truth it had all the finery necessary for a good margherita pizza but not for a great one. I scoffed it down nonetheless, and released my tastes buds to a drop of red wine, the selection here being varied: the good, the bad, and the ugly. I got the plain:)

Downstairs at the entrance, where I took up temporary residence, it was much like a fastfood diner while upstairs there was the more restauranty feel, the ambience intended by the recommendation I had been given. Ah, but they really didn’t know me. Tucked away late afternoon in the solitude of a dimly lit recess was not my style. I crave life and with the comings and goings of the take-away people I had material with which to work.

The service was quick and friendly, if a bit subdued or maybe it was that I was expecting something which I hadn’t even put words nor image to. Was I being unreasonable? Probably. It was Poetry Day and I was off to a book launch and somehow that had me feeling important.

Overall: The pizza gets a 7/10 while the atmosphere restaurant-wise is yet to be seen. Weekend nights upstairs must surely be different to late Thursday afternoons by the entrance. As for its location: easy in and out of town, just off  the 105 bus stop either way.

Most definitely poplular with the locals for takeaway and, as has been my experience in the past, any place the locals go to is a place to be, unless it includes a length of rope, a gallows, or an arena and some freely prowling lions.

Don Francesco’s could be a single man’s teatime and chat, or a family’s mid-week treat, and with all the potential upstairs I wouldn’t be at all surprised if the young folk would venture in at weekends enthralling first dates with their understanding of Italian and economising in the process.

For dessert I had Madártej fagyi (an ice-cream of sorts) which was a tasty affair and just to take the edge off my criticism concerning friendliness I was given the cup and saucer in which it came for free.

A thought has also struck me:

What if all those serious faces are not indicative of general grumpiness but rather of pained attempts by locals not usually exposed to foreigners trying to speak Hungarian to understand what I am saying. Maybe I’ve mistaken their concentration face for a moody one! Stranger things reputedly have happened.

← Arts and drafts
The Province of Taste ( Levendula ) →