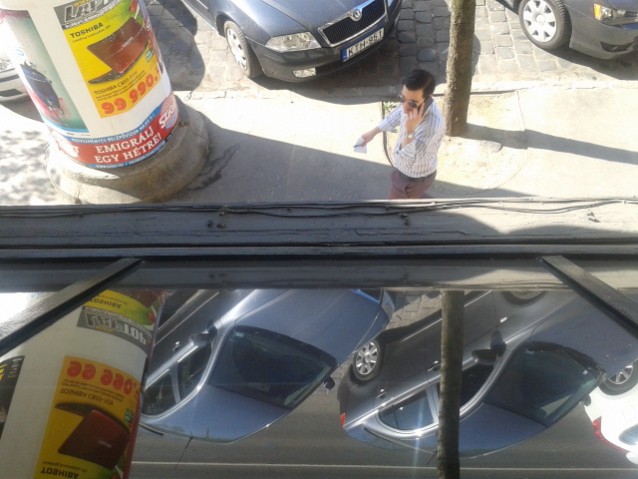 The violence rendered on his face spoke volumes.
He didn’t seem content enough to just stare me down.
He seemed to be growling just under the metre.
He seemed to be grinning just beneath the frown.
There seemed to be no joy in his presence
and yet his t-shirt proclaimed him Mr. Happy.
Was it some kind of joke, and did the others get it.
Well, they did seem to be laughing quite a lot.
But this guy remained solid, mimicking my discomfort.
There was malice in his soul brimming over into his eyes.
But he held a composure, a measure, almost a reserve.
I snorted as false bravado, he returned it venomous.
I held his eyes for as long as he held mine.
The church bells rang and I looked up, away.
Did he do so? I could not tell, but he was watching me
when I returned to watching him…
and then he was gone, swinging out of my vision and a couple stood there
till invited to the bar whereupon the sniggers returned.
And then he was back, looking at me looking at him.
I scratched my head,as did he. Coughed and convulsed in unison…
Every night…a voice whispered from the bar
Poor thing…God how I hated pity.
Doesn’t anybody tell him?
Why?
It’s cruel…
I get up to leave and as always I brave the leering fool and as ever he steps aside as I pull open the door…and then the steps drag me up into the street, and home.